Alright, enough with the talk of businesses closing and what not. Time to welcome a few new shops to the hoods. On Cambie we have a fine (hopefully it’s fine – haven’t tried it yet) new little restaurant called Pronto which has opened up in the old Art’s Flowers local. Looks like a tasty sandwich place specializing in the the wonders of the pig – the magical animal. I also hear they have a liquor license which sweetens the pot a little. Over here on the Drive it’s goodbye Me and Julio’s (never was much of a fan to be honest) and hello Sorry Babushka which identifies themselves as a “Euro themed sports bar”. Make of that what you will. But the place that I’m most interested in, if it indeeds happens, is Liberty Wines opening in the old Wazubee space. It would be nice to have an alternative to the current liquor outlet with it’s sad, diabolical selection of wines and beers. Good luck to you all!

New Releases for Tuesday May 24th

All Good Things– The lovely Kirsten Dunst and the suave Ryan Gosling star in this unheard of drama/ thriller about a lovely New York couple who have the idyllic life. Or do they? It’s a movie so of course they don’t. She goes missing, he’s a suspect. What’s to happen? Based on a true tale.

Bedeviled – As if there haven’t been enough South Korean revenge thrillers! If you weren’t satiated by the awesome and awesomely violent I Saw the Devil, maybe you can wet your whistle on this puppy. A woman returns to the small island of her upbringing to visit a childhood friend. Apparently things aren’t going to well for the friend. Much nastiness and horror ensue. This one gets quite good ratings on the internets!

Blood Creek – Revenge, Nazis and the occult are on the plate in this tasty looking morsel. Upside – I like all the subject matter. Downside – it’s directed by Joel Schumacher. Make a good double bill with Blood River.

Down Terrace – The British specialize in family crime films (especially comedic family crime films) almost as much as the Koreans work in the revenge genre. This one looks pretty good as a British crime family tries to ferret out the informant in their midst who is making their lives uncomfortable. Comes with much acclaim and aplomb.

Found Footage Festival Vol. 5 – Saw this at the Rio the other night and it had me laughing so hard I had tears streaming down my face. Tears! Great party DVD. Invite some friends over, have a few pops and/or other stuff and enjoy. One of the highlights was a clip called Rent-A-Friend, about a guy who made a tape of himself pretending to have a conversation with you. It’s hilarious as he starts to delve into some dark secrets of his own family! It was so enjoyable that I also brought in the original Rent-A-Friend production. Trailer can be viewed below. Amazing!

Gnomeo and Juliet – Animated thing retelling the famed Shakespeare tragedy but in garden gnome form. Wonder if everyone dies at the end?

Oliver Sherman – Tense, drama dealy from the country known as Canada. Garret Dillahunt (one of my favorite actors going today) stars as a dude who invites himself to stay with an old army buddy and his wife (always swell Molly Parker). Things seem pleasant at first, but you know this guy’s going have something else going on that is not quite kosher with his hosts.

Public Speaking – Martin Scorsese directed doc about famed talker Fran Lebowitz. If you like her, I’m sure that you enjoy this doc. If you don’t like her I suggest you watch something else – Gnomeo and Juliet perhaps?

Red, White and Blue – Heavy drama set in Austin, Texas about a freewheeling girl ( she’ll sleep with anyone) who runs into various savory and unsavory characters. Supposed to be very good and dramatic in a heavy drama kinda way.

I’m sure (well not really all that sure) that you heard about Lars Von Trier’s weird Nazi lovin’ press conference at Cannes last week. Well here’s the clip of him babbling on and on. It’s great just to watch Kirsten Dunst seated next to him react to the nonsense he was saying – 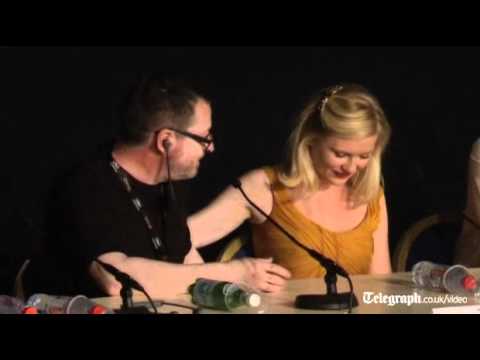 In case you were wondering who walked away with the hardware at Cannes, here’s a article featuring the winners and losers – http://www.avclub.com/articles/the-tree-of-life-and-kirsten-dunst-overcome-boos-a,56442/

And of course you all know that May is Zombie Awareness Month. Well the fine folks at the Centre for Disease control issued this guide on what to do in the event of a Zombie Apocalypse. Just so ya know – http://emergency.cdc.gov/socialmedia/zombies_blog.asp

And here’s a little trailer for Rent-A-Friend as promised. http://foundfootagefest.com/

Well, that’s all for this week, kids. Have a great 7 days, and remember, keep watching.